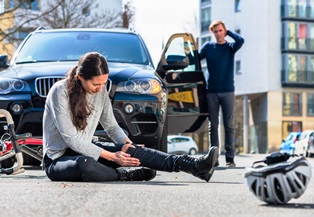 When a negligent motorist causes an accident with a bicyclist, it's not surprising that the individual with the most serious injuries is the rider.

Aside from a helmet, he or she has no protection from being struck by a much larger vehicle.

Without a helmet, traumatic brain injuries and spinal injuries are more common.

In 2016, 840 bicyclists were killed in accidents with motor vehicles and nearly 500,000 suffered injuries—some critical. Fortunately, bike riders may be entitled to financial recovery from the at-fault driver.

Driving Errors Are a Leading Cause of Bike Accidents

The National Highway Traffic Safety Administration (NHTSA) reports in the latest data that more than 70 percent of bicyclist fatalities happen in urban areas. And nearly 20 percent of collisions occur  between 3:00 p.m. and 5:59 p.m. In nearly half of all incidents, the cyclist "came in contact" with the front of a light truck—the most common type of vehicle involved in bike accidents.

Unfortunately, a 2017 Orlando Sentinel news story shares NHTSA data from 2015 which indicates Florida ranked first among states with the most pedalcyclist fatalities.

The top five causes for these accidents include:

Contact Us If You Were Injured in a Bike Accident

Our experienced bike accident attorneys are ready to collect the evidence you need to prove the negligent driver caused your bike accident and to fight for the compensation you deserve. Fill out our online form to schedule a free consultation with a member of our legal team to get your questions answered and learn more about legal options.