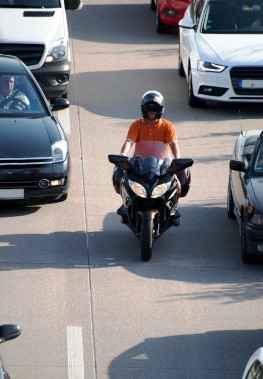 Lane splitting, which occurs when a motorcyclist drives between two lanes of slower moving cars, is a divisive issue among road users. Some people believe the practice is dangerous, reducing reaction times for drivers and increasing the odds of a biker being hit if a driver changes lanes. Others argue that lane splitting is practical and beneficial, as it can reduce traffic congestion and allow more cars on existing roads and highways.

No matter what your opinion is on lane splitting, you should know that the practice is illegal in Florida—and can make it harder to recover in a bike crash case.

How Lane Splitting Can Affect Your Motorcycle Crash Case

Florida state laws have a specific ban against lane splitting: anyone who rides a motorcycle “between lanes of traffic or between adjacent lines or rows of vehicles" will be ticketed for a traffic offense. Since it's illegal, lane splitting is often seen as reckless or negligent behavior on the part of the biker, and could be seen as fault for the accident.

However, you're not automatically barred from legal action even if you were lane splitting at the time of the accident. All factors of your motorcycle accident case should be considered carefully, including:

If you have been injured in a motorcycle accident, we can help. Simply fill out the form on this page today to set up your free consultation with an injury attorney.