Seven Factors That Help Determine Liability in a Multi-Vehicle Wreck 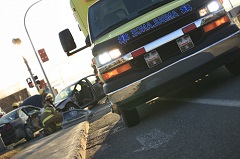 Any accident can be a nightmare resulting in serious injuries or death. However, multi-vehicle collisions—sometimes involving 100 vehicles or more on the highway—can cause many more catastrophic injuries and fatalities than other accidents. That’s not surprising, since people are hit multiple times from different angles by more than one vehicle traveling at a high speed.

Who is responsible for this disaster? Is it only the driver that hit the first vehicle? Or could other negligent drivers face some liability?

In order to receive compensation for his injuries, an accident victim needs to prove who caused the crash. When many vehicles are involved, more than just the driver who hit the first vehicle could be partially at fault in causing a person’s injuries. Making it more complicated, a determination must be made as to the level at fault in causing an accident. For example, the person who started the wreck could be 70 percent at fault and three other motorists could each be 10 percent negligent.

Often investigators such as an accident reconstruction expert may be needed to help sort out who was at fault. Factors an investigator could consider in establishing the causes of a victim’s injuries include:

If you were involved in a multi-car crash, you need to contact an experienced car accident attorney as soon as possible. There could be many victims of the accident seeking compensation, and you want to make your own claim promptly. Call our experienced legal team today at 800.556.8890 to schedule a free consultation.