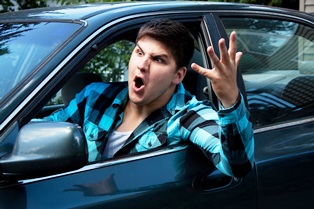 Aggressive driving is increasingly a problem for motorists who must share the road with people engaging in this dangerous behavior.

According to an AAA Foundation for Traffic Safety study, aggressive driving is a factor in 56 percent of fatal accidents, and nearly eight million drivers admitted to getting out of their vehicles and confronting other motorists or ramming their cars.

You might not be able to control the behavior of someone else, but you can reduce the likelihood of a problem and control your reaction.

Guidelines to Avoid an Aggressive Driver

Aggressive driving is defined as unsafe driving practices that are done deliberately or with disregard for the safety of others. Tailgating, erratically changing lanes, yelling at others, or making gestures are a few examples of aggressive driving. It can escalate into even more dangerous road rage where a driver engages in a criminal act, like pulling out a gun.

Here are some tips on how to avoid an aggressive driver:

Did an aggressive driver cause your car accident? Let us help you hold him accountable for injury compensation. Call our office today to schedule a free consultation and learn more about your legal options.