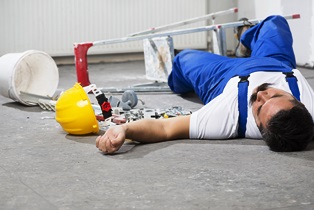 No matter what occupation or industry you work in, you're in danger of suffering a serious injury or death. Work accidents are to blame for thousands of fatalities each year in the United States, and countless more long-term injuries that leave workers suffering with chronic pain, limitations in movements, and restrictions in the types of work they can perform—if they're not permanently disabled.

Unfortunately, dangerous workplace fatalities are increasing. According to the U. S. Bureau of Labor Statistics, 5,190 workers were killed in 2016—a 7 percent increase from 2015. This is the third straight year that fatalities increased, and the first year that deaths topped 5,000 since 2008.

Workplace Accidents That Most Frequently Cause Death

While many types of accidents on the job can result in workers losing their lives, some types of incidents are more likely to lead to fatalities than others. The U.S. Bureau of Labor statistics indicate:

Did a loved one die in workplace accident? Did you suffer injuries on the job? At Johnson & Gilbert, PA, our experienced workers’ compensation attorneys have decades of experience fighting for the rights of employees who were killed or injured while working. Take advantage of our free consultation to learn about your rights to workers’ compensation benefits under Florida law. Call our office today and schedule your appointment.