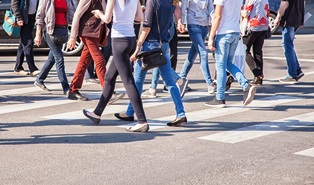 In the age of driving while texting, distracted pedestrians, and increased cycling for health, pedestrian accidents happen more frequently than ever. According to the National Center for Statistics and Analysis, one pedestrian is killed in a traffic crash approximately every two hours, while a pedestrian is injured in a crash every eight minutes.

But one study examined whether a comprehensive enforcement and education program would cut down on these deaths—and the answer was a resounding yes.

The National Highway Traffic Safety Administration (NHTSA) released the results of a follow-up study in 2017, four years after its high-visibility enforcement (HVE) study was implemented in Gainesville, Florida. In the follow-up study, research staff observed natural crossings at select locations before, during, and after the HVE program. Research assistants also performed staged road crossings using a uniform crossing protocol. After the study was complete, the number of pedestrian crashes per year fell from an average of 101 to 83.

The follow-up study found that the rates of vehicles yielding to pedestrians continued on an upward trend and in most cases, pedestrian incidents in those sites had fallen even lower than those in the original study. Pedestrian yielding was now more common in these crossing sites, despite no new enforcement or additional publicity campaigns.

Researchers believe the reasons pedestrian accidents went down include:

The fact that more drivers were readily yielding to pedestrians and the significant drop in pedestrian crashes suggest that similar high-visibility enforcement and education programs could have a long-term effective on pedestrian safety. Do you think the pedestrian crossings near your home are safe? Would you support a similar program in your area? Please leave a comment or share this article on Facebook to let us know what you think.