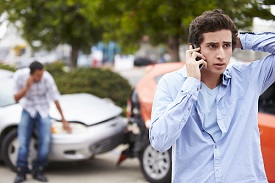 In the blink of an eye, your baby has gone from banging Matchbox cars together to taking your spot behind the wheel of a car. Unfortunately, although her enthusiasm hasn’t changed, your concern has. It once was a moderate worry that she might hit herself in the head with a tiny toy truck; now, it’s terrifying dread that she may get hit by a two-ton truck.

Although your concern may seem a little farfetched, it isn’t entirely without merit. According to the Centers for Disease Control (CDC), more than 2,000 teens age 16 to 19 were killed in the United States as a result of traffic accidents in 2013. In the same year, another 250,000 teens were seriously injured and required emergency room treatment for their collision injuries.

In addition to being inexperienced, teen drivers have an increased risk of causing and suffering traffic collisions as a result of behavior. In fact, teen drivers are three times as likely to cause an accident than drivers over the age of twenty. Among teen drivers, males are twice as likely as female drivers to cause an incident, while newly licensed teens and those who drive with teenage passengers have the highest risks for severe collision injuries.

It takes an incredible amount of focus and responsibility to drive cautiously. Unfortunately, these are two traits that some teenagers lack, simply because their brains are continuing to develop. As a result, immature behavior, short attention spans, and susceptibility to peer pressure put teens at great risk for causing traffic accidents.

Given the high potential for your teenage motorist to experience a traffic accident, do you think your role as a parent should include instilling proper safety protocols before he or she starts driving? Should you add another bullet point to your list of “teenage talks?” What else can you do to help protect your child from a traffic injury?

Let us know your thoughts by leaving a few sentences in the comment section, and then browse through our collection of in-depth articles for information on car safety and protection.

Safety is the most important thing for you and your family, so please help us spread the word about teenage driving dangers by sharing this page on Facebook and Twitter.