Distracted Driving and Teenagers: Why This Is a Dangerous Combination 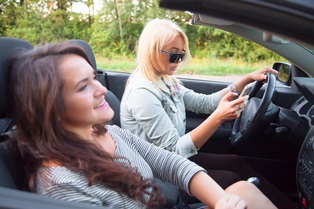 With our increasing use of electronic devices and the stressful pace of many peoples’ lives, distracted driving is becoming even more of a problem on Florida highways and streets.

According to the Centers of Disease Control and Prevention, each day, an average of nine victims are killed and 1,000 injured in motor vehicle accidents in the United States due to distracted driving.

This danger increases even more when the motorist is a teenager, who already has the disadvantage of being a less-experienced driver.

Why Teens Are Distracted While Driving

When someone is engaged in distracted driving, his eyes and mind aren't fully on his task. Drivers under the age of 20 have the largest proportion of fatal crashes caused by distracted driving. They're also more likely to engage in other risky behaviors, such as not wearing seat belts, driving after drinking, or being a passenger with a driver who has been drinking.

Florida’s Laws on Cellphone Use When Driving

It's permissible to talk on a cellphone while driving, but it's illegal to drive and text. It's also illegal to use a phone while driving to read or send emails, or interact on social media sites. Whether a distracted driving practice is illegal or not, it can still be considered negligence if a teenage driver causes an accident due to these dangerous activities.

Did a distracted teen or other driver cause your accident? We can help you file your claim for compensation and fight with the insurance company for the compensation you deserve. To schedule a free initial consultation, call our office today.