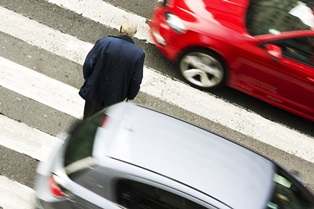 As the number of people on the roads goes up, it’s only natural for the accident rate to increase as well. The National Highway Traffic Safety Administration (NHTSA) estimates that car travel increased 3.5 percent in 2015, but pedestrian deaths increased by 10 percent and bicyclist deaths 13 percent for the same year—an increase that could be due to much more than just a higher number of overall travelers.

Florida Pedestrian Crash Deaths Are on the Rise

Traffic fatalities nationwide hit a seven-year high in 2015, with one pedestrian killed by a car every 96 minutes. A recent report from the Governors Highway Safety Association estimates a total of 5,997 pedestrian fatalities in 2016, more than a 10 percent increase over the previous year. Unfortunately, the report also indicated that Florida has one of the highest rates of pedestrian injury in the nation.

Study data included some worrying trends for Florida pedestrians, including:

Pedestrians can take heed of important information from the study to reduce their risk of injury. First, the data revealed that about 82 percent of pedestrian fatalities occur outside of intersections, suggesting that crossing mid-block, jaywalking, and walking next to busy roads instead of on footpaths increases the risk of injury. Second, roughly half of pedestrian deaths in 2015 took place between 6 p.m. and midnight, suggesting that walking or biking at night could double the risk of an accident.

Researchers aren’t sure what's causing the sharp increase in pedestrian injuries, but they do have a few theories. Injuries are more likely to occur when the driver or the pedestrian is intoxicated, since alcohol can dull senses and response times. In addition, both drivers and pedestrians are increasingly distracted by cellphones, making each party less likely to see oncoming dangers in time to prevent an injury.

If you or someone you know has been hurt in a pedestrian accident, contact one of our experienced attorneys today by filling out the quick contact form on this page.